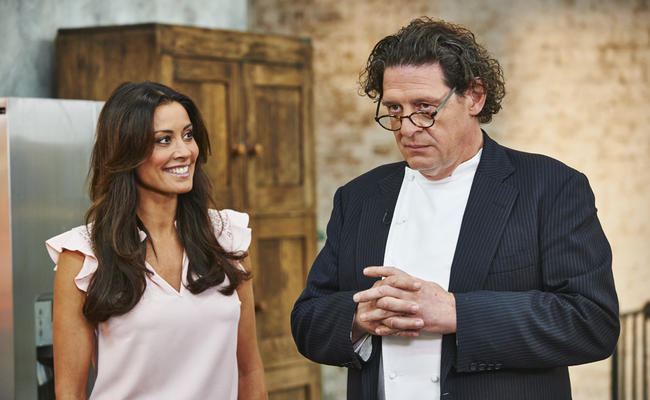 Humble Pie tests enthusiastic amateurs' culinary skills and self-belief. In each episode, four aspiring chefs are set three challenging cookery tests in the 'Humble Pie kitchen' to battle it out for an ultimate cash prize of £2,500.

But in a unique twist, after each round the competitors must ruthlessly critique each others dishes, judging them from worst to best. They then face a dilemma; eliminate themselves and 'cash-out' for a smaller exit fee if they think Marco will have rated their dish the worst, or stay in the game for the big cash prize but risk going home empty-handed.

Melanie and Marco are a fantastic pairing and bring sugar and spice to this series. When Marco is revealed as the Humble Pie 'taster' the contestants are both terrified and excited. Humble Pie is a game of bluff and the tactics are as important as the cooking itself. The best chef doesn't always win.

This entertaining series combines great food with a compelling psychological twist. Not only are the contestants placed under huge stress to produce great food for none other than Marco Pierre White, but then they have to cope with the pressure of holding their nerve as they try to outwit their fellow competitors.

This is no ordinary cooking competition, it's gastronomic poker where the most riveting action may not necessarily take place in the kitchen.

There's nothing tougher than cooking for Marco Pierre White, but even if our contestants fail in that challenge, the beauty of this show is that they can still bluff their way to victory.